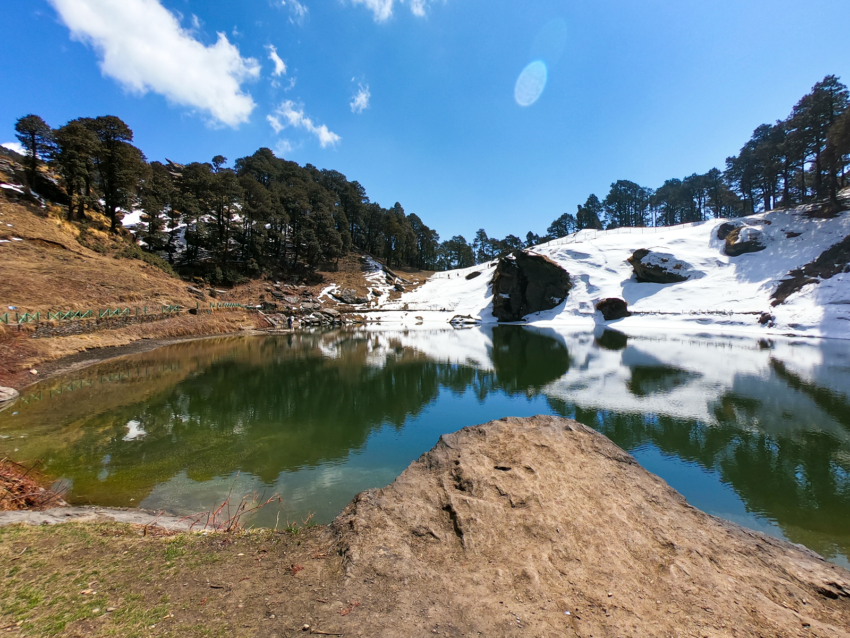 Serolsar lake trek has been on my list for the last couple of months. However, due to road blockage up till the month of February, I was not able to plan the trip. And then as I enquired with the tour agencies, I came to know that the route has finally opened up for Jalori pass in the first week of March.

On day 1 of my trip, I explored the village of Jibhi. If you have been also traveling first time to Jibhi, do not miss visiting these places. Day 2 started with visiting Jalori pass and trekking to Serolsar lake.

Start of the trek

Trek to Serolsar lake starts from Jalori pass and is one way around 5 km. It takes no more than 2 to 3 hours to complete this trek. The lake is surrounded by thick vegetation of alpine trees, during winters up to 2 to 3 ft snow is accumulated here and the lake is completely frozen. Thus the best time to explore this place is either summers or the late winters.

The trek starts from the temple atop Jalori pass, you can find some shops to rent gumboots and stick if required. Since the starting of the trek, snow was everywhere and I was excited to see what the next few hours hold. We started at around 11 AM, weather was clear and the sun was shining bright. The weather was slightly chilly but the warm sunshine on our heads made the conditions perfect for enjoying the next 2 to 3 hours.

After walking for around 10 to 15 mins, we came to a patch of icy road. Ice was too slippery and it was hard for me to cross it. On one side, it was a deep slope and for few minutes I was scared to cross. Somehow by holding the rocks on my left side, I crossed this patch.

The shedding rays of happy sunshine falling on the snow sparkled everything around us. Trees were shining more than ever as if they were welcoming us to their land. I was really excited and happy as always, when in mountains.

After passing through the icy patch, we climbed down few stairs and reached the dense untouched forest area. From now on, this jungle will be our companion on the rest of the trek. After walking for around half an hour, we saw few small shops selling water, tea, Maggi, and other eatables. Snow patches could be seen all throughout the way in the areas not directly exposed to the sun. From the rest of the areas, snow has already melted away.

We crossed the old wooden shops, gave a friendly smile to the lady sewing sweater outside her shop. It always feels lovely to greet people you barely know. There is some sort of happiness when you exchange a smile with them. I always feel people on mountains are kind and helping souls.

We kept moving, and now since the elevation has started, our pace was slowed down and we had to stop after walking every 15 to 20 mins. Despite all of this, on the other side, the view of snow-capped peaks shining in pleasant sunshine was the motivation to keep moving.

In the next few minutes, we reached an area that was like a passage in between two huge rock walls. Due to elevation gain, we were stopping after every 10 to 15 mins to catch the breath.

After this last ascend, we reached an open area with the snow-covered field on my right side and green on my left (where all the snow has already melted away). There were many small shops and a few of them also offered the stay. People were resting, enjoying the food, and some were clicking pictures in the snow. One of the shop owners told us the lake is now only 500 m from here. I was really excited to get the first view of the lake.

We crossed the open area where all shops were there and started moving forward, but the snow here was the slippery one. Each footstep has to be kept with utmost care or else you will be sliding down the entire way. We walked down a couple of steps and then we got the first view of the Emerald-colored Serolsar lake.

After walking few more meters down, we finally reached the lake. Though I was disappointed that the lake was not frozen but the views were however totally amazing. A thick blanket of snow covered the backdrop of the lake

A perfect spot to click pictures is a huge stone overlooking the entire lake. However do not sit over it with the shoes, as it’s a sacred stone for the villagers.

On the other side of the lake, is the temple of Budhi Nagin. The mother of all Nag deities of Himachal such as Shesh Nag, Kamru Nag, Ghunda Nag. Climb some stairs to reach the temple and enjoy the serene views of the lake from the top. Spent some time at the temple, listen to the mysterious story of the Budhu Nagin from the locals themselves.

Why refrain from going into the lake?

Lake has proper shooting points so avoid going into the lake and refrain others from doing the same. It may hurt the sentiments of the villagers as the lake is a sacred worship place for them.

Overall the Trek to Serolsar lake is a beautiful and offbeat place to explore in Himachal. You can also opt to explore Jibhi.

Follow me on Instagram, Facebook, youtube, and read more travel articles on my Tripoto profile. Check out the latest blog posts on the 15 days road trip to Kinnaur– A journey through the most dangerous roads of India