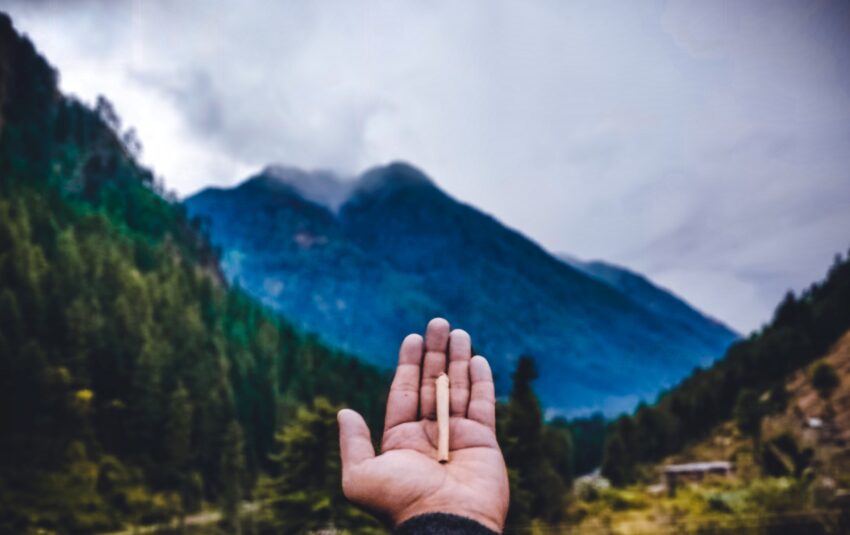 Trek to Kheerganga starts from Kasol, a small village located in the Kullu district of Himachal Pradesh. It is nestled deep into Parvati Valley and is a famous destination among tourists. Kheerganga history is dated thousands of years back, this place is known as the abode of Lord Krishna. Read best places to visit in Kasol here.

It took us an hour to reach the starting point of the trek that is Barshaini. It is approx 13 km from one side which takes around 5 hrs to cover. The Kheerganga trek offers some beautiful sights that will refresh your mind.

I took Route-2 while trekking to Kheerganga and Route-1 on the way back.

Scenic views during Trek to Kheerganga

On the entire trek, there would be a lot of shortcuts but it’s advisable not to take them as it could be risky. En route, you will get to see Shiva Temple, Rudra Naag Fall, unique rock formations, and most beautiful of all -Autumn color leaves.

Around halfway to the trek, one comes across this huge waterfall with Dhaba on the right side. Water is so clean and pure that you can refill the water bottles here. I took a short break and enjoyed Maggi and tea here.

Trekking trail becomes a little difficult from here since there is a continuous climb after this. But the route is well marked so no chance of getting lost. Around 45 mins before reaching Kheerganga, there is a beautiful waterfall on the path itself. There are two cafes with gorgeous views.

The entire trail passes through a dense forest with beautiful autumn colored leaves all over. I am sure you would like to stop every time to capture those colors but trust me, the camera wouldn’t do justice. Be prepared to be amazed by beautiful waterfalls and the Parvati river view all along the trail.

There are no hotels to stay at Kheerganga but simple places. All the staying places have either an open air café (during the day) and a closed eating space with heating arrangements for cold evenings. Some big cafés and restaurants have space for as many as 50-100 people to sit and eat at one point of time.

From the campsite, the hot water spring is hardly a climb of 10-15 mins. Separate kund has been dedicated to men and women. There is even a lord shiva temple just behind the kund.

It is said that Kartik, son of Lord Shiva and Goddess Parvati lived here in kheerganga. He was so mesmerized by the beauty of this place that he meditated here for thousands of years. It is a ritual to pay homage to the temple before entering the kind.

During our descend, we followed Route 1 passing from Nathan Village. Some of the best scenic views of my entire trek were on this route. We encountered numerous waterfalls on the way and watched amazing valley views filled with autumn-colored leaves.