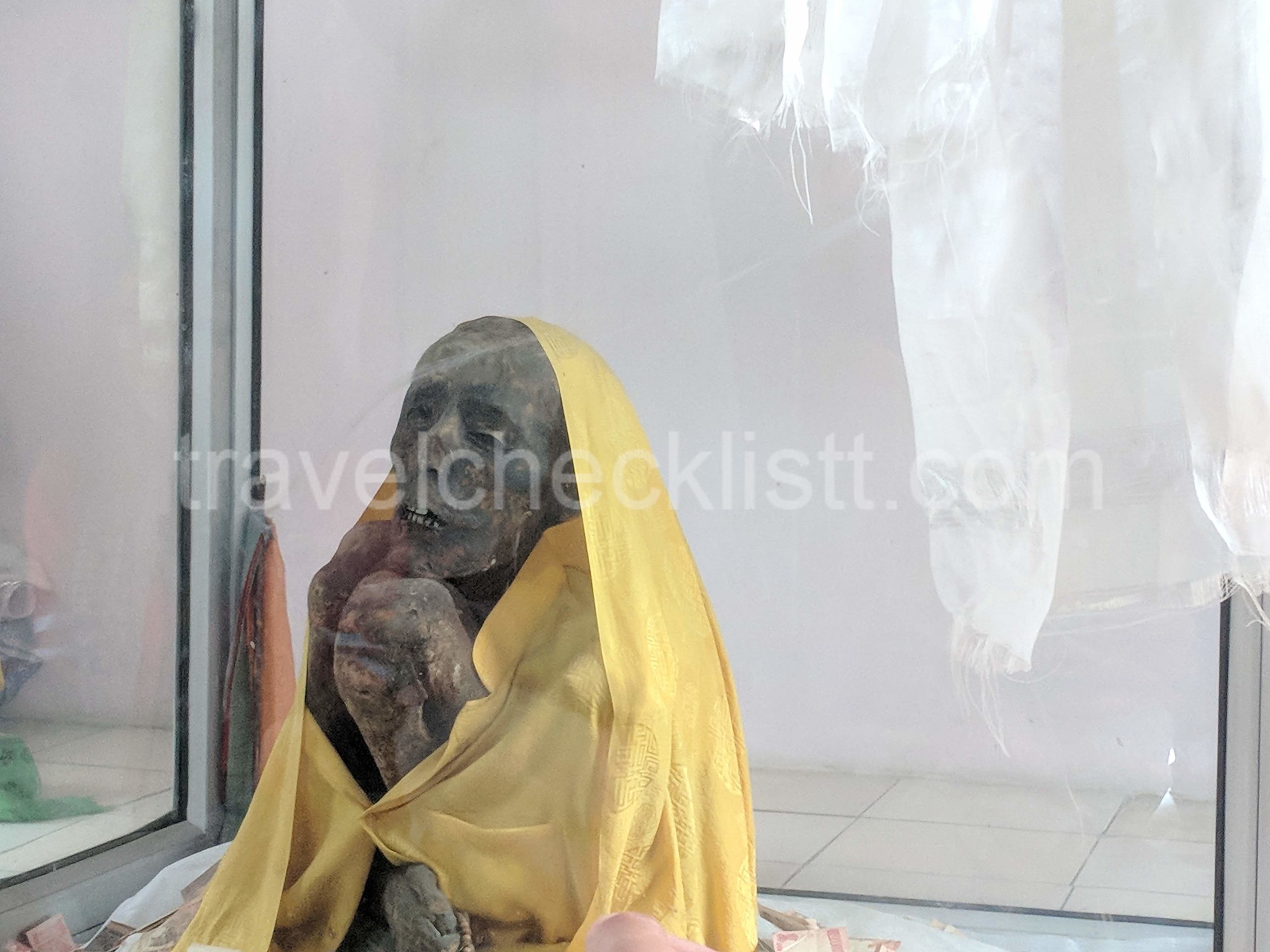 The word Mummy is sufficient to create curiosity in our minds and we instantly imagine the Egyptian Mummies wrapped in bandages. However the Mummy at Gue village is self preserved and is kept in a glass chamber without any bandages.

The shrine where this glass chamber is kept is small and can accommodate up to 6 people at a time.

Gue is a small village comprising of 50 to 60 houses. Here houses are painted white and are made of stones and mud. It is situated at a height of 10,000 feet above sea level . From tabo which is a 1000 year old monastery, Gue is approx 40 kms away.

Mummy is around 500 years old and still intact with teeth and skin. Villagers once in a year gather to cut the nails and hair, they grow, though very little but yes.
It is kept in a glass box inside a small shrine which can accommodate only 5 to 6 people at a time. People are allowed to take pictures but without flash as artificial light might damage the mummy.

The shrine is right outside the Gue Monastery. Lama sits firmly with its fist around one leg, chin resting on its knee. Villagers said the lama went through the self mummification process while being alive.

Who was this buddhist Monk?

The mummy is known of Monk Sangha Tenzin, also known as Mummy lama. He is among very few well known buddhist monks who started self mummification while he was alive.

What is Self Mummification?

The process of self Mummification is really tough and it takes years to turn a normal body into mummy’s. Monks would starve themselves to reduce the fat that would rot after they die and also ran candles around the skin which makes it completely dried up. Sangha Tenzin is also believed to follow the same way of Mummification.

Its said that the monks also eat some dose of poisonous nuts, to remove the moisture from their body while they are alive.

Carbon dating revealed the mummy dating back to year 1475 which is over 500 years old. It was found in siting position with rosary in one hand and a strange belt tied from neck to knee.

How the Mummy was found and when?

It was found by villagers in 1975 when his tomb was destroyed in earthquake. There are several stories behind how this Mummy reached Gue village. Some of them states that Monk sacrificed his life for well being of the village and that is the reason they worship him. Villagers daily offer prayer at the shrine.

Gue was not known before in the outside world. However, since the day mummy has been identified here, Gue has been on every travelers list and is now on global map . Villagers believe this was the intention of the Sangha Tenzin to attract lot of attention to the village. If his mummy was not found here, no one would have known about the village of Gue.

If you get a chance to visit Spiti, do plan for Gue village. Don’t be disheartened if shrine is locked on your visit. Villagers keep the shrine locked whole time and open only when some one visits.