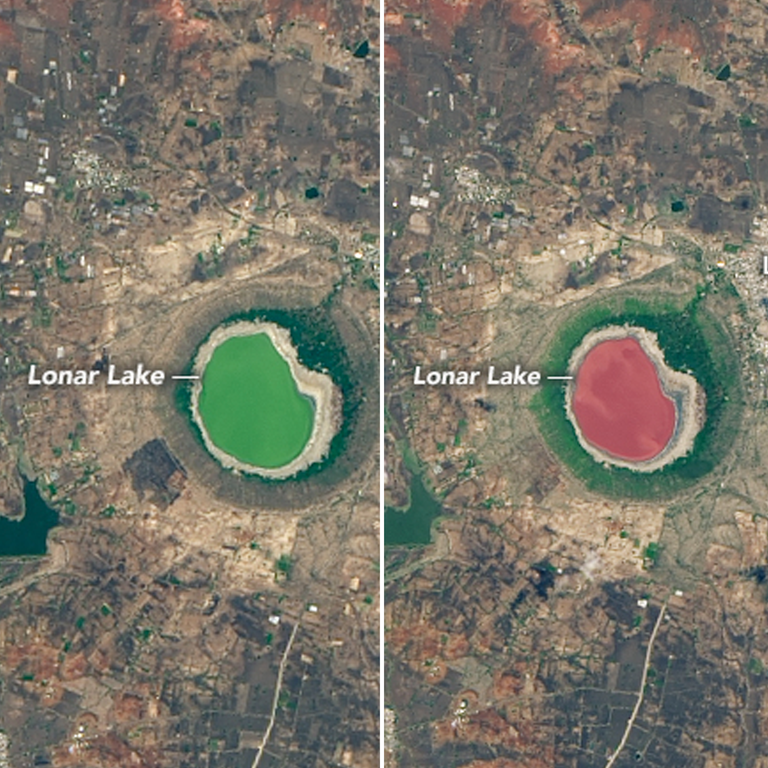 Lonar is famous for the crater, also known as Lonar lake or Lonar crater, formed over 50,000 years ago due to the collision of a meteorite on the surface of the region. It is located at Lonar in Buldhana district, Maharashtra, India, and is a meteor impact lake.

The lake is in the shape of a bowl and is emerald in color. It is one of the four known, hyper-velocity, impact crater in basaltic rock anywhere on earth. Here are some pointers about the lake-

I have written a detailed post on Lonar lake with a day-wise itinerary, read here.

Experts and locals theories on what caused the lake to turn pink suddenly?

Recently the lake is reported to be turned pink and there are different theories in support of it. Experts and locals are telling that this is not the first time lake has changed color, however this time it’s more glaring. Lonar lake is a reported geo-heritage site with pH level 10.5.

Experts believe the change is likely due to increased salinity in the water, the presence of algae, or both. The phenomenon is not only creating curiosity among scientists but also among nature enthusiasts.

There is no oxygen below one meter of the lake. There is also an example of Lake in Iran where water becomes reddish due to an increase in Salinity.

Some scientists also say that the micro-organisms like Dunaliella Salina, Halobacteriaceae and Salinibacterium create special types of color substances due to which color turns red.

Due to Low water level or red algae?

The level of water currently is low as compared to the past few years and no rain is pouring fresh water. The low level of water may have increased salinity and change in the behavior of algae due to atmospheric changes may be the reason for color change.

Also, Researchers are trying to figure out if the presence of red algae caused this change.

What is hidden around the lake?

There are around 10 to 11, centuries-old abandoned temples around the lake. You have to pass through an adventurous, dense jungle trek to explore these temple Ruins. Compasses fail to work in certain parts of the crater and our guide showed this effect in some parts around the lake. Click here to know more.

Let’s all wait for the scientists to reveal the actual reason behind the change in the color of the lake. But I hope we all agree that the visit to this place will be full of adventure, curiosity, and some new experiences. So put it on top of your first post COVID trip.