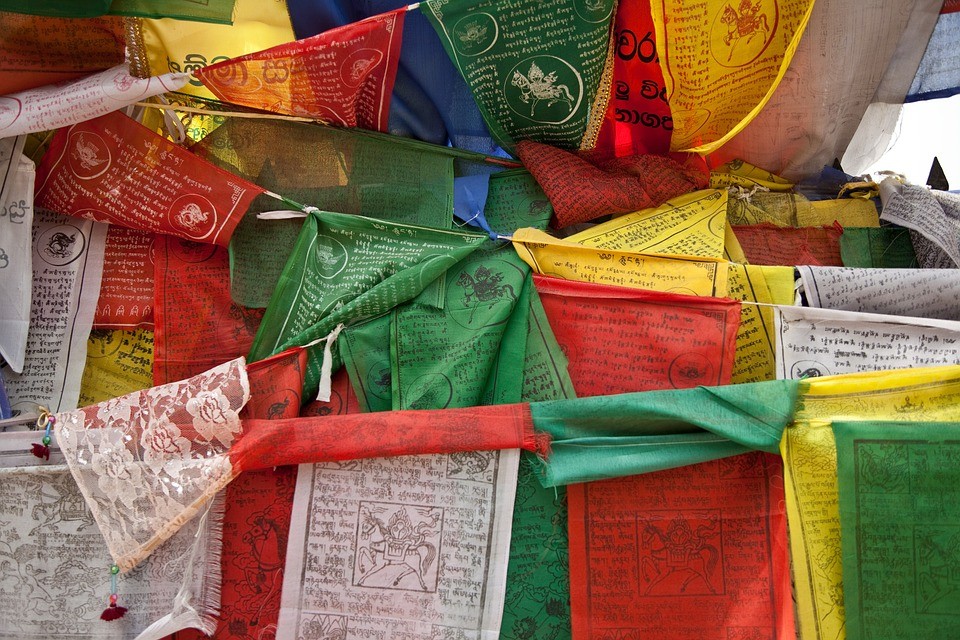 Tibetan Flags or the Prayer flags are seen almost everywhere in Buddhist regions. People usually buy or ask someone who is visiting Leh-Ladakh to bring these flags for them. However, only some of us are aware of their significance and that these are not just some fancy items hung at your door or at the back of your car.

What are the Buddhist prayer flags? What those colors signify and why it asked always to hung them outside? Check this post to know answers to all of these questions.

Prayer flags come in the set of five and are always ordered right to left. The five colors are associated with 5 elements. Each element has a different color associated with it.

Blue signifies space and sky, white symbolize air and wind, red for fire, green symbolize water, and yellow symbolize earth. It is believed that with the balance of these 5 elements, peace and harmony is maintained.

Om Mani Padme Hum is the condensed form of all Buddhist teachings. It can be seen written on the prayer flags as well.

Om/Aum – Its is an syllable mostly used in various Indian religions.

The middle part mani Padme is often interpreted as the jewel in the lotus. Lotus symbol is widely present in Indian religions and is a symbol of purity. Due to its ability to grow and sustain despite surrounding with mud.

And up to some extent, this is what we learn from the teachings of Buddha, to remain unaffected inside, by the outside circumstances.

3. Why are Tibetian flags supposed to be hung outside?

Prayer flags are believed to spread compassion, peace, and wisdom in mankind. It is always seen that these flags are hung on high and open areas. The reason being, the wind carries the prayer to even the farthest of the areas and by the movement of wind, the air gets purified with mantras.

According to Traditional belief, symbols on the flag are sacred and should be treated with respect. The flags should not be placed on the ground or used on any clothing.

4. Do you know what are Lung ta and Darchog?

There are two types of flags, Horizontal ones called Lung ta and vertical called Darchog. Lung ta are rectangular shapes and are connected along their top edges with a rope or thread. These are mostly hung on high areas as mountains and between two objects such as rocks.

Darchog is single vertical flags attached to poles or rooftops. You can read detailed information here.

It means prayer were carried by breeze- fading colors is a sign of it.