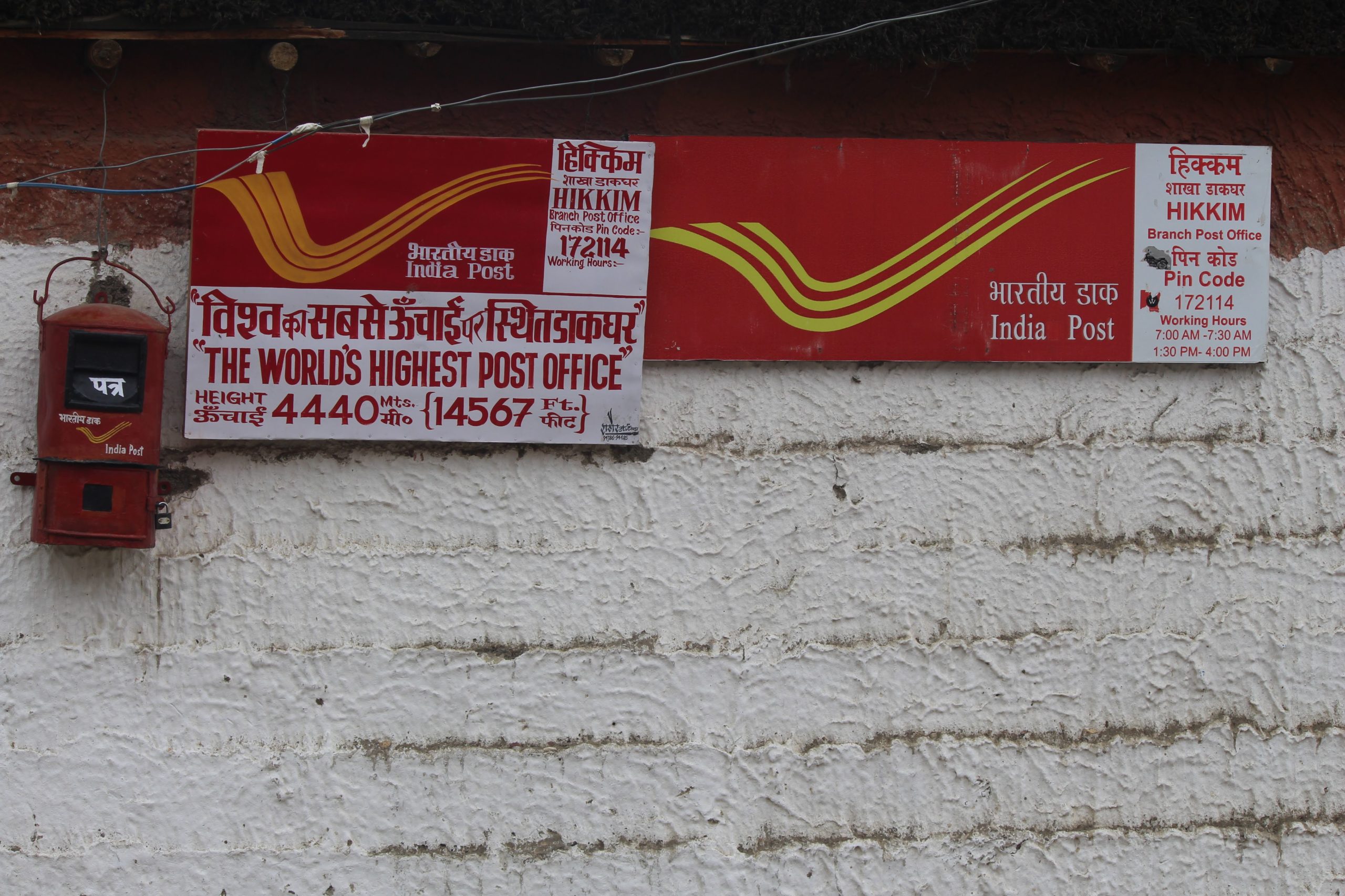 This blog post covers 4 amazing facts about Spiti, which makes it must to be visited place. To know complete itinerary of Delhi-Spiti road trip, click here.

Mr. Rinchen, the postmaster working here from past 29+ years

The postmaster Mr. Rinchen has often seen sitting there with his daughter. Post- office runs on the first floor and he gets a rent of Rs 500 from postal. department. Here is the picture from my trip, I couldn’t capture inside look of the post-office, since it was too crowded.

How to Reach the post-office?

To reach Hikkim, one has to take the motorable road. From the parking area, you have to walk down to reach the post-office. The houses here are made of stone and mud just like every other village of spiti. All the houses are clustered together below the road.

Here fossils are easily available as compared to other villages and you can find small kids selling them.

Survival Spirit of Spitians in -18 to -20 degrees

Spiti valley is totally cut from the north up to 8 months due to heavy snowfall. Valley receives around 259 days of sunlight. Do not be surprised to know that temperature recorded here ranges from -18 to 20 in winters and sometimes even drops to -30 degrees.

Water pipe freezes here in winters, which means no running water for the whole 6 months. So no water to bathe, wash your face, and flush. You must be wondering about the last point- no flush, so things are done here with a dry compost toilet. When it snows, locals run out to remove it from their roofs. This has to be done on high priority, even when the temperature is -5 or below.

Residents here, take special care of hand pumps. Every evening they wrap it with multiple layers of plastic sheets, empty rugs, and sacks, to prevent it from freezing at night when the temperature remains between -18 and -20.

As a daily schedule, locals have to carry water to their homes in 40 or 20-liter cans. During emergency situations, even though ambulances are there, it’s of no use due to road blockage during heavy snow days. Hats off to the survival spirit of the locals of Spiti, to live in the extreme winters up to -20 degrees.

Gue village of spiti is known for the mummy of a lama, India’s only Natural Mummy. It is around 500 years old and still intact with teeth and skin. Villagers once in a year gather to cut the nails and hairs, yes they grow, though very little but yes.

It is kept in a glass box inside a small room which can accommodate only 5 to 6 people at a time. People are allowed to take pictures of mummy but without flash as artificial light might damage the mummy.

It sits firmly with its fist around one leg, chin resting on its knee. It is said the lama went through the self-mummification process while being alive.

The Highest bridge in ASIA

At 13596 ft, Chicham Bridge is highest in ASIA and connects two villages Chicham and Kibber. Look down and you will yourself looking into 1000 ft deep gorge known as Samba Lamba Nallah.

Kaza is the main and the largest town of the Spiti district. My stay in Kaza was just behind the Sakya Tangyud Monastery or Kaza monastery as refereed by locals.

It is around more than 1000 years old monastery and also has a newer version of it built adjacent to the old one. There is no artificial light allowed inside the monastery as it could damage the paintings drawn on the walls.

It is one of the famous monasteries in Lahaul Spiti district, located at an altitude of 13,667 feet above sea level. The nearest town for the Key monastery is Kaza.