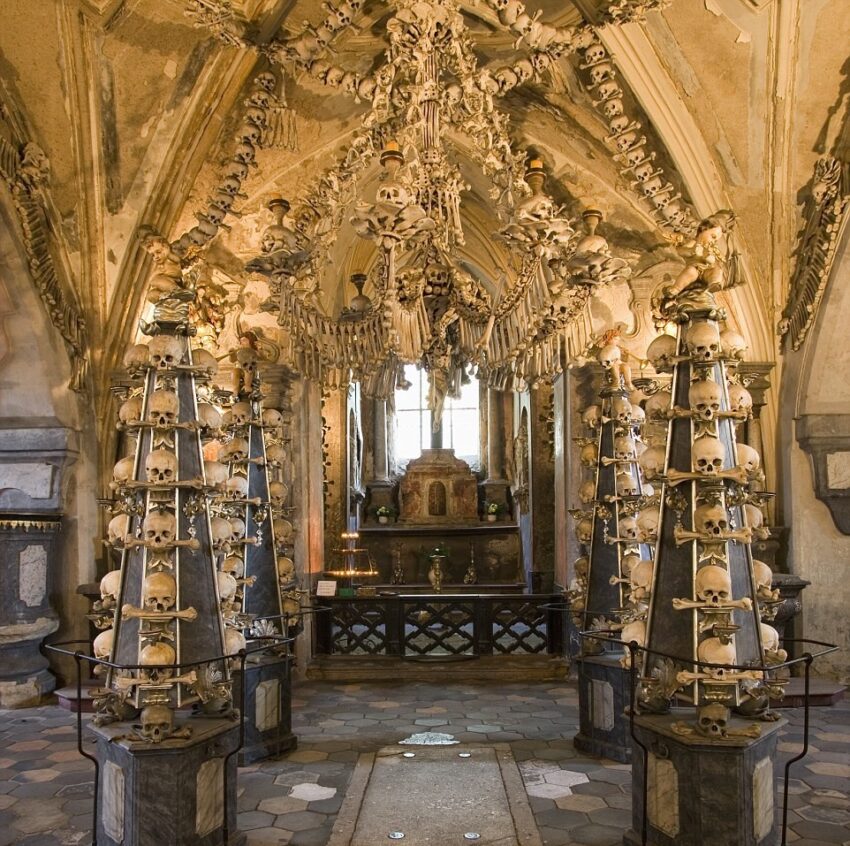 Why the name Bones Church?

Sedlec Ossuary or the Bones Church in Prague welcomes you with the 40,000 to 70,000 skeletons in the church.

It is not just any ordinary old medieval church, it is artistically decorated with more than 40,000 human skeletons. Thus it is known as Bone Church or the church of Bones.

So as the story goes like this, King of Bohemia sent the Abbot of Sedlec monastery to Jerusalem. During his return, he brought a handful of soil from Golgotha(The hill outside Jerusalem where Jesus was crucified) known as holy soil.

He spread the holy soil around the Sedlec cemetery, making it one of the desired burial site for the people of Bohemia and neighboring countries.

Everyone wanted to be buried in the holy land and more than 30,000 were. Soon there was no space left for everyone to rest in peace and dead bodies were shifted to the crypt for making room for newly dead.

Who carved the bones and skeletons?

In the 15th century when the community decided to build the church, many bones were moved and stacked beneath the new church.

Until 1870 everything was undisturbed when the church hired a local woodcarver, Francis Rint to create something beautiful from the piles of bones.

He was responsible for bleaching every single bone to give a uniform look to the room. And he did succeded in the task, the tremendous chandelier which can be seen right at the entrance of the room consists of every bone from the Human body.

Though this place looks scary, while visiting it you will most likely find it peaceful.

The 40,000 people wished to be buried there, so they went to Sedlec in the first place. Now their bones are right in the middle of the chapel.

Know Before You Go

How to reach Bone Church from Prague?

Sedlec Ossuary is a 1-hour train ride from Prague. The Bone Church is about 15 to 20 mins walk from Kutna Hora station.

Trains to Kutna Hora runs every 2 hours from Prague. The latest train departs from Prague at 3:45 am.

How much it costs?

One way train ticket from Prague to Kutna Hora costs 115 CZK and round trip is 215 CZK.

How to Book train ticket from Prague to Kutna Hora

If you want to book a ticket online to save time at the train station, visit this site. On the upper right-hand side, there is a drop-down to change the language to English.

So are you planning to add this place to your bucket list? Do tell me in the comment section if you know about any such unique place.